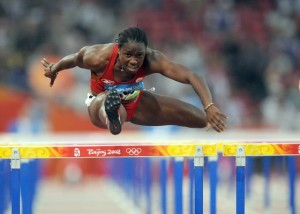 The first doping case since the beginning of the World Championships has arrived in record time.  The protagonist, this time, is a Nigerian athlete who got the Spanish nationality on 2007: Josephine Onyia; she should have run on Thursday the 100m hurdles trying to snatch the semifinal and then the final: nothing of that, obviously, will be possible for her.

STUBBORN – Of course, it will not be possible for her, and this is because Onyia, beside the national record for 100 hs, also holds a much sadder record: this has been the fourth positivity since 2008 when, in September, she was stopped in Lausanne for taking dimethylamine and, some times later, in Stuttgart, she resulted positive to clenbuterol. Incredibly, the Spanish Federation discharged her, in the first instance, but the International Federation (IAAF) lodged an appeal to the Tribunal Arbitral of Sport (TAS) and it won it, suspending her agonistic activity for two years. Onyia came back on the track in November 2010 but, already in July 2011, her urinalysis detected scrap of dimethylamine: this time, the National Federation decided to punish the althlete suspending her for two years, even if the new anti-doping international rules would have provided for a four years stop. But, that’s not enough, the 29 years old, already in the IAAF’s “black list”, did it again: during the first weekend in July, on the occasion of National Championships in Castellon, she had to do a new test that gave positive results to the assumption of anabolic steroid, for the umpteenth time.

EXEMPLAR PUNISHMENT  – It is what the world of athletics basically asks for after the series of happenings which marked out the carrier of the Spanish athlete. Exemplar, so that it may become an example and a reprimand for those who want to cheat, although sometimes not in the smartest way, as the hurdler did. It is also interesting that Onya belongs to Valencia Terra y Mar Team, the team led by Rafael Blanquer who has among his athletes Natalia Pygyda as well; the European champion of 400m indoor this year in Prague resulted positive to the stanozolol in July 2009, a substance taken in by the more famous Ben Jonhson too, and she was disqualified for two years. The Spanish hurdler now, according to the protocol should now undergo a lifelong disqualification not only from the all the competitions but also from any activity related to the sport (coach, trainer, member of the federation, etc…) unless she agrees to collaborate with authorities to explain what happens in the obscure doping-business; such move would allow her to reduce her exclusion to a period of eight years.