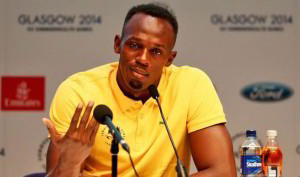 Getting closer to the beginning of this World Championships in Beijing, the spotlights aim with more brightness, on Usain Bolt and his titanic challenge against Justin Gatlin. It quite seems that the unbeatable Jamaican runner found an opponent within his reach this year but it is already well-known that this contest will not be just based on the stopwatch, but rather a face-off between two diametrically opposite sport figures, in matter of athletic ethics.

Usain Bolt, in fact, despite his extraordinary performance on track, did not miss any anti-doping inspections and no anomaly has never been detected in his blood tests, which witnesses the great sportsmanship and transparence of the world record holder. On the contrary, Justin Gatlin failed the dope test even two times (last time on 2006); this caused a roar of rumors about him and, many times, he was accused of corrupting fair-play in the sport.

During a BBC interview, Bolt does not manage to keep the thought to himself, he admits to resent the questions from the journalists during these last days before the World Championship. It seems that these questions are about the doping, first of all, (“All I’ve been hearing is doping, doping, doping” Bolt says), as to mean that his physical and mental conditions are less important.

In addition, he suffers the pressure of hearing everyone tell him to have the responsibility to win at all costs in order to preserve the reputation of this sport, but he does not compromise on this point and his answer is pithy: “I cannot save the imagine of the sport all by myself, each athlete has to take on the responsibility of protecting the sport, going ahead, forging ahead without using shortcuts as drugs or any other kind of illicit substances”.

Apparently, these two speedy athletes compete not only for the world title but also for the spirit of the sport.