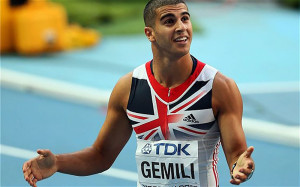 There is nothing to do for Adam Gemili as well, who should have worn the British sport shirt to take part to the 4×100 relay during the World Championship in Beijing.

The runner got injured during the leg of Birmingham Diamond League in June, the race where he managed to overcome the barrier of 10″ during the 100m contest.

Gemili went, with his team, to Fukoka field hoping he would have managed to recover in order to take part to the worldwide event, at least for the relay race competition, but Neil Black, his Performance Director, stated that to compete to the sport event is a too much of a risk and the athlete cannot afford getting worse for the forthcoming Rio Olympics and London World Championship 2017.

From his point of view, Adam Gemili is sorry but he understands the decision, aware that he tried his best. He will stay in Beijing to see all the races from the stand seats and to support his mates during the training and the challenges.