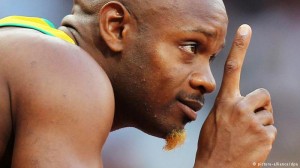 We saw this coming at his latest races that he would have come back in great shape as we used to know him. But what we saw yesterday was probably the best Asafa Powell ever seen on a 100mt track.

Jamaican Trials, the former record-beaker runs side by side with the young Yohan Blake returned after his past seasons problems striving for a place in the forthcoming World Championship in Beijing.

Powell starts very fast pushing his limits already in the first meters leaving his opponents far behind. Near the finish line he “shuts down” his engine and almost stops before the goal. the stopwatch says 9″94. Maybe not an astonishing time as it is but seen in the big picture his meaning could be really important, just like Bolt has accustomed us before with his performances in the elimination rounds of the Olimpic games and World Championships.

What about Blake then? Blake takes second place with an effortless 10″24 that ensures him a spot in the next round.

Now Asafa’s next opponent is the stopwatch in the semi finals and in the finals.  maybe this time the “old lion” will hit the jackpot!