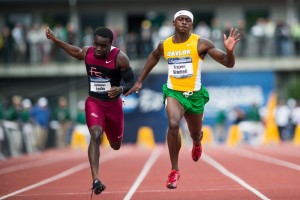 It has started, at the Hayward Field in Eugene (Or) the USATF Outdoor Championships, which, besides assigning the national championship, will also be considered as trials for the forthcoming World Championship in Beijing.

Let’s start with Trayvon Bromell and his outstanding performance (9″84), his personal best and tenth best time ever in the 100mt race. The fastest, although, is Remontay McClain (9″82) with an over-the-limit of regularity wind (+4.9) in favor. Behind him  Tyson Gay, in the same battery, must settle for second place (9″85). Isiah Young, Michael Rodgers, Marcvin Bracy, however, don’t  miss the train for the semi finals, competing for a final that cannot be missed.

The long jump track is also affected by strong wind where Marquis Dendy takes the “gold” with an amazing 8.68 although raised with the help of the wind (+3.7). Jeff Henderson is not so lucky and settles for second place with an 8.44

In the 10000mt race the victory goes to Galen Rupp after spending large part of the race chasing his opponents and scores his seventh consecutive title in 28’11”61.