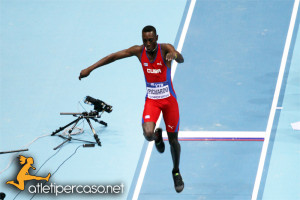 The list of the athletes that ran away from Cuba gathers a new name: it’s the vice-world champion Pedro Pablo Pichardo. The triple jumper arrived some days ago in Stuttgart, in Germany, for a group training with some others cuban athletes and their coaches, but two days ago he left the place leaving no traces behind.

A source close to the athlete told us that two mornings ago Pichardo skipped the tranings and his room was found completely empty. We don’t know if he’s still in Germany or he decided to reach another country where to start a new life, like for example Spain, where Orlando Ortega and Javier Sotomayor live.

What happens now is the istantaneous exclusion from the national team, that means we won’t see Pichardo in the World Championships of London 2017. On the personal level, the cuban law forbid the desertors to come back in the next 8 years.

Pichardo had troubles with the federation in the past, receiving a 6 months disqualification from May to November 2014 because he refused to keep Ricardo Ponce as his coach. The athlete indeed wanted to be coached by his father, but the FCA, Cuban Athletics Federation, was against the choice and decided to suspend him; at the moment the silver medal from Beijing 2015 was coached by Daniel Osorio. Could be this the reason of the drastic decision.

Many have been the athletes that tried, and succeded, to run away from Cuba and chance nationality, last of them the hurdler Orlando Ortega. In 2013 Ortega decided to not go back in the country because of problems with the federation. Since some months he managed to get the Spanish citizenship and the right to compete for the national team.

FCA already knows about the situation and soon should give explanations, considering that the World Championships are approaching and Pichardo is one of the favorites.