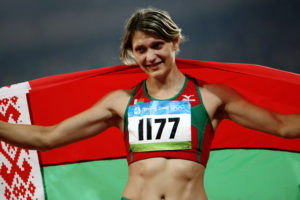 The unceasing antidoping machine keeps on reanalysing all the samples taken during past Olympics controls.

This time, the cleaning process has incriminated 5 high profile Belarus athletes, who took part in Beijing 2008 and London 2012 Olympics.

The most famous name is the one of Aksana Miankova (already announced this summer), hammer thrower who won the gold at Beijing 2008, establishing a new olympic record with 78,69m. Four years later she ended up 7th in London 2012. Both samples resulted positive to turinabol and oxandrolone. Beijing’s gold medal will eventually hang at Yipsis Moreno’s neck, letting the other byelorussian athlete Darya Pchelnik to step on the podium.

Another medal to be reassigned is the silver won by Natallia Mikhnevich at Beijing 2008 in the shot-put. Ironically, the medal will be given to the compatriot Nazdeya Opstachuk who had already lost a world and olympic title because of doping.

Other athletes incriminated by CIO are Pavel Lyzhyn, 4th in the shot-put at Beijing 2008; Nastassia Mironchyk-Ivanova, 7th in the long jump in London 2012; and Sviatlana Usovich, semifinalist in the 800m at Beijing 2008 and member of the 4x400m relay (now disqualified)