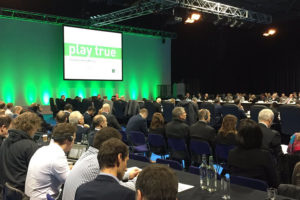 The 38 members of the WADA Committee met two weeks ago in Glasgow, to discuss various reform proposals and for the re-election of the incumbent president Craig Reedie for three more years.

Russia‘s scarce antidoping policy, which led to its exclusion from the international competitions, is still a hot topic. Russia still does not recognize the doping scandal as supported and encouraged from the State and WADA announces that they will have to re-acquire trustworthiness before being rehabilitated.

This seems hard because of the continuous refusal to accept the results of the investigation. To this regards WADA admits to have refused a 300.000$ funding from Russia and that it will keep supporting the ban.

Further allegations regard the suspect link with the hacker group Fancy Bears and the attack carried out by them to steal and reveal files regarding many Olympic athletes, who would have used medicines and forbidden substances for therapeutic use. In order to defend itself from these attacks, the Agency spent more than 200.000$ to hire a computer security society.

Eventually, the International Olympic Committee proposed to ban from the Olympic Games all the athletes who received sentences for doping longer than 6 months.