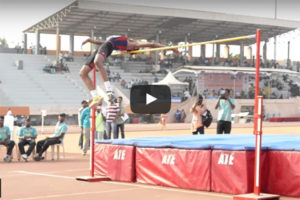 With 1,2 billion of inhabitants, India has almost reached China with its 1,3 billion. Nevertheless, the athletic presence is totally concentrated in China.

But things may change soon.

Two weeks ago, in Coimbatore, the Indian Junior Championships took place, where the most promising athletes of the country challenge on tracks and platforms.

Among the set records of the event, the most important comes from the high jump track. Tejashwin Shankar, still 17 y.o., succeeded in bettering the senior Indian high jump record reaching 2,26m. Shankar cancelled the record of 2,24 set by Hari Shankar Roy in 2004 after 12 years.

Below the video of the wonderful jump:

Shankar has not crossed the national borders yet since this year he was not able to participate in the Junior World Championships because of an accident. He would have been one of the protagonist since the event was won with a 2,27m jump.