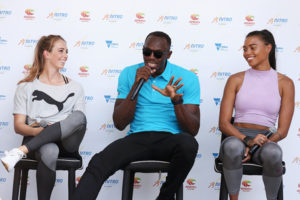 On February we’ll see Usain Bolt competing in Australia for Nitro Atlethics, a new circuit made up of three races, created by the Australian Federation.

It is a totally new format, different from what we are used to see: the athletes will be divided into six teams made up of 24 players who will challenge themselves on traditional races and also on unconventional ones, such as mixed relays.

During the three days of competition (4th , 9th and 11th of February) the athletes will try to do their best to bring points to their teams. Every race will take place on its own, so the public won’t have to choose which one to follow everyday.

Usain Bolt will not simply be the protagonist of this challenge, but also the captain of the team “Bolt All-Stars“; the Jamaican is very enthusiastic about this new adventure and is looking forward to joining this event which could change the future of athletics.