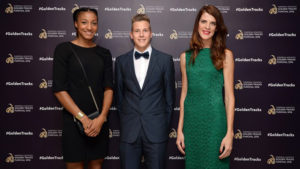 In Funchal during the Golden Track Gala the prestigious European Athlete of the Year award was assigned. For the men, the cup went to Mo Farah, who managed to win for the second time the Olympic Title on the 5.000m and 10.000m and to lead the seasonal European ranking on the 1500m, 3000m, 5000m, 10000m and the half-marathon. This award sums up with two more, won in the 2011 and the 2012.

For what regards the women, the victory went to the amazing Ruth Beitia, 37 years, and Olympic gold medalist in the high jump. A very long career which led to the most important medal this year and to the third European title in a row; furthermore, she was the first Spanish woman to win the Olympic title.

The Rising Star awards (both for men and women) were also assigned during the night. Among women, the victory went to the Belgian Nafissatou Thiam who rose to glory in the Olympics, improving her PB in 5 disciplines out of 7, setting a new National Record and achieving the Season World Best Performance.

He was born in 1996 and he is already Triple Jump European Champion. Max Hess, the Men award winner grabbed two important medals this year: the European one and the silver during Portland World Championships.