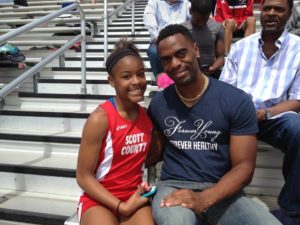 Bad news hits everyone, but when a world class athlete is hit by a tragedy, it is impossible not feel involved as well. This is the case of the USA sprinter Tyson Gay.

In the morning of the 16th of October, Gay’s daughter, Trinity, was killed during a shooting between two cars in front of a restaurant.

The fifteen years old girl was hit at the neck by a stray bullet. She was urgently moved to the Chandler Hospital, the hospital of the university, but all the attempts to reanimate her were vain. The body of the victim was recognized by the father.

The young athlete’s life, who dreamt of emulating her father, was suddenly ended. She was proud of calling his father a champion, her champion, and happy to be the light of a man who considered his daughter as his best achievement. It is a profound hit, a pain from which it is not possible to run away. Several athletes expressed their sorrow, like the hurdler Lolo Jones, the jumper Brittney Reese and the Track and Field American Federation (USATF) itself. In the aftermath, the police arrested the three men involved in the shooting.

Screams of protest arrive from all over the world, criminality ramps up in the States and the disproportionate amount of weapons accessible to everyone favors the spreading of similar events and, often, young innocents pay highest price for this.

All the TrackArena staff expresses its condolences for the Gay family’s loss.