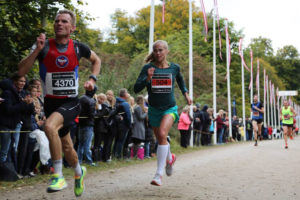 Even the sprinters, sooner or later, have to deal with a race which is a bit longer than a field lap.

This weekend it was the Danish athlete Stina Troest’s turn, specialized in the 400hs, who ran a 13.3 km race arriving at the 4th palce.

An unusual competition for the athlete who boasts a second position at the Singapore Youth Olympic Games 2010 and the Tallinn U23 European Championships 2015 and a third place at the Rieti Junior Championships 2013 on the 400hs.

Despite the middle distance not being her specialty, the athlete managed to complete the Eremitageløbet in 49’14.

Not bad for a one lap specialist!Up-and-coming Danish 400m hurdler Stina Troest finished fourth in a 13.3km race in Denmark yesterday in 49:14.