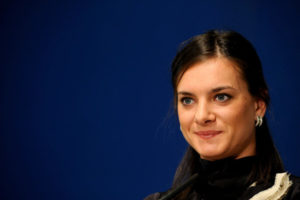 This year at Olympic Games we did not have the opportunity to see one of the best jumper of all time: Yelena Isinabyeva.

Because of the Russian disqualification from the competition, all the Russian athletes, with the exception of Dariya Klishina, who has been living in America for years, were now allowed to take part to international competitions, including the Olympic games.

Isinbayeva fought more to restore her nation’s honor and to allow clean athletes to take part to the biggest sport competition, but she had no success in doing so. She even appealed to the International Court for the Human Rights and then, when she saw there was nothing to do, she announces her retirement from competitions.

The polevaulter, though, does not want to leave the world of athletics and she decided to help her national athletics movement as much as she can; for this reason, she is going to candidate herself for ARAF’s presidency.

”I took this decision, I want to lead our Federation and bring back inside IAAF”, the athlete states. The elections for the presidency are going to take place on the 9th of December and Isinbayeva seems to be the favored to win.