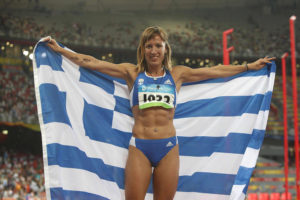 Two bronze medals, the triple jump World Championships in Osaka 2007 and the triple jump Olympics in Beijing 2008, might be reassigned. This could happen because the Greek triple jumper Pigi Devetzi failed a doping retest.

The athlete, who has been already banned for two years in 2012 since she escaped an anti-doping test in 2009, tested positive to stimulating steroids, for a time span that goes from 2007 to 2009, exactly in the two years the athlete awarded the two medals.

In Beijing, the Greek athlete had won the bronze medal with a jump of 15.23, better than the Kazakh Olga Ripakova who, in case Devetzi would be disqualified, would have three Olympic medals, bronze in Rio 2016, gold in London 2012 and this bronze in Beijing 2008.

Actually, the athlete retired from competitions and the disqualification will not affect her presence in the track. Nevertheless, she has already announced, through her lawyer, Michalis Dimitrakopoulos, that she will lodge an appeal to IAAF, stating she has never assumed illicit substances.