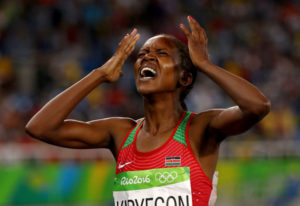 Those who win an Olympic competition receive a consistent sum of money from the national Olympic Committee but not many athletes received cash as a prize for the victory of the medal.

The 1500m winner, the Kenyan Faith Kipyegon, brought electricity in her hometown, the Ndabibit village. What she managed to achieve for her people is worth more than a medal and a sum of money.

The village in which Kipyehon lives was created in 1980 and it never had electricity before. For this reason, her family was not even capable of watching the athlete winning the Olympic gold medal.

Soon after the end of the race the middle-distance runner’s father appealed to the Kenyan president Kenya Uhuru Kenyatta asking to connect the village to the electrical grid so that he could have been to watch his daughter winning medals for her nation.

Within ten days the Ndabibit village had its electrical grid connection and Samsung promised a television to Kipyegon family to allow them to follow this promising athlete in her competitions around the world.

Faith Kipyegon won much more than a gold medal in these Olympics.