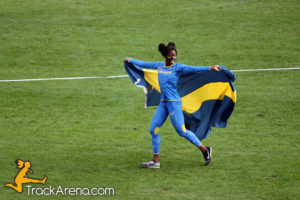 Day two of the Finnkampen / Ruotsiottelu in Tampere was welcomed by a light but constant rain. Weather anyway hasn’t stopped the athletes, who are really used competing in there conditions.

READ ABOUT THE DAY 1

For the entire competition, Sweden and Finland have been only few points distant each other, making the events even more interesting, not counting the individual results.

Another double came from the finnish sprinter Samuli Samuelsson who was the only one breaking the 21″ wall on the 200m. 20″94 his finish time. But that was not enough because Sweden got more points in his events taking 2nd, 3rd and 4th place.

Really interesting the men 10.000m. Long distances are really useful in this case to get points by using tactics, especially being the two teams so close. For almost half the race Jarkko Järvenpää (FIN) was in the front with more or less 60m of advantage on the following group, but then David Nilsson (SWE) closed the gap and took the lead till the finish line (29’37″03). But the difference has been made by Ossi Kekki (FIN) who overcame Andreas Åhwall (SWE) just in the last straight assigning the event to the blue-white men.

Two incredibly well balanced 4x400m lighted up the stadium. Both men and women battled head to head to win the race. Sweden won the women race in 3’16″59, but the crowd exploded when the last leg of the men relay overcame the Swedish team, who led till that momen, in the last metres.

Differently from the usual, 4x400m relays are not the last events of the Finnkampen, but they leave the last show to the men 1500m. The reason is that in this event you can see the real struggle of the athletes who has the winning of their country on their shoulders. Meanwhile the men Javelin takes place, maybe the most popular event in Finland.

Kim Amb (SWE) incredibly won the javelin (84,50m) making the two teams presenting at the 1500m start with a tie on 194 points. Spectators could not ask for something more exciting.

Unfortunately this year Sweden had an unbeatable team on this event, killing a bit the suspance as Rogestedt, Berglund and Leandersson takes the first three positions. Best part was seeing both the entire teams running across the field to support their colleagues, really amazing to watch.