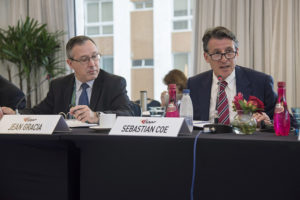 In Rio, adding to the high number of competitions, yesterday has been held an IAAF Council meeting during which many decisions about future competitions have been taken.

In primis, the biggest news concerns IAAF World Youth Championships: this event in fact will be cancelled from the international calendar starting from 2018. Last edition will be the Kenyan one, planned next year in Nairobi.

Sebastian Coe, IAAF President, commented the decision in positive way: “We decided it’s not the best pathway for those athletes at that stage of their career”. This is a strong message from IAAF against the early specialization we assisted in the last years.

Next on the list is the World Cross Country Championship of Kampala 2017, Uganda, where has been added a mixed relay, 2 men and 2 women, each of them has to run a lap. The starting order it’s up to the team.

Sticking to the relays, in the IAAF World Relays Bahamas 2017 we’ll no more see the Distance Medley Relays, replaced by the mixed 4x400m relays.

Concerning 2018, first decision has been to add in the World Half Marathon Championships scheduled on the 24th of March in Valencia, a new road race among the mile or 5km.

Moreover, Cheboksary (Russia) will not host the World Race Walking Team Championship. The new venue will be assigned before the end of December 2016.

Another important modification is to remove 5000m and 4x400m men and women both from the schedule of the IAAF Continental Cup in Ostrava. They will be replaced by a mixed 4x400m relay.

In conclusion, IAAF World Relays 2019 have been confirmed and assigned to Bahamas.