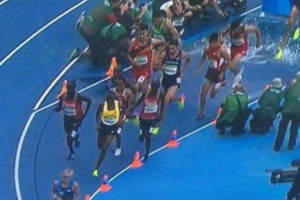 After cutting the finish line in third place in the men 3000st final in Rio 2016, the kenyan athlete stated in the mixed zone he wanted to close his career with this medal.

But he could not imagine in few hours an appeal requested by the french federation would have took away from him the bronze medal to assign it to  Mahiedine Mekhissi.

Reason of the appeal, upheld by the giury, was the infraction of rule 163.3b, in other words the steeplechaser ran inside the curve. However, the rule 163.4b could save the athlete from the disqualification, stating that the athlete has not to be disqualified if “is pushed or forced by another person to step or run outside his lane or on or inside the kerb or line marking the applicable border”.

The clou moment is clearly visible in the picture posted on Kemboi’s Facebook Page, in the same time he annouced he will not retire anymore after he was communicated about the disqualification. He now wants to take that medal back next year at the World Championships in London 2017.

As you can see, the situation was really confused and the available space for the athletes was really small. Despite this, judges decided to rewrite the arrival order.

We’ll wait to see Kemboi on the track again in London winning his, according to us deserved, medal.