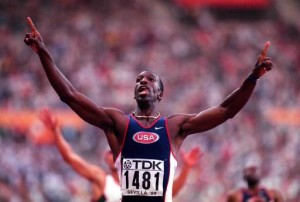 It is known, records are there to be broken. This is what the ex-world record holder of 400m, Michael Johnson, should have thought when, after 17 years, the South African athlete, Wayde Van Niekerk, has beaten his record.

As all of us, fans of athletics, Micheal Johnson was dazzled by what the young South African athlete did more than disappointed because of his record has been broken; then, the USA loses its last running race record.

The star and stripes sprinter was commenting the event live for BBC and this was his reaction when he saw his record blowing away: “From lane 8. World record. He took it out so quick, and I’ve never seen from 200 to 400 anything like that. What we will want to see is what his splits were. He could have very well have run negative splits, meaning that he ran faster in that second 200 than he ran in the first 200, which would make this even more amazing.“.

From his words, it seems he is even happy that Wayde Van Niekerk smashed his record and concludes his comment with a “Congratulations Wayde, well done”.