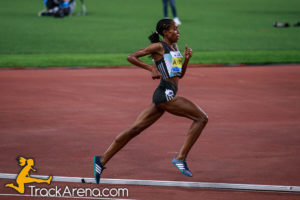 The first Olympic final that took place on the blue track of Rio was the women’s 10.000m.

37 athletes in competition: among them the season leader Almaz Ayana and the reigning Olympic champion Tirunesh Dibaba. As expected, a first group, led by Ayana, Dibaba and Alice Nawowuna, left the others behind dominating the 25 races.

Great rhythm for Almaz Ayana who, at the half race, heads towards a possible World Record cleaning in 14’46 along with Nawowuna.

29’31″78 was the previous record set by the Chinese athlete Junxia Wang during the Olympic Games in Beijing 1993.