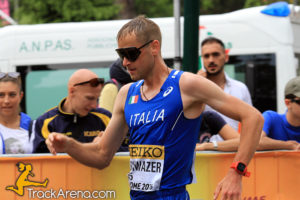 Alex Schwazer really believed on that, he wanted to compete in Rio: instead, nothing to do for the italian racewalker, forced to come back home empty-handed. Furthermore, to be more precise, the Olympic champion Beijing 2008, disqualified for EPO close to London 2012, will come back home with a disqualification of 8 years. In fact, the appeal lodged by Schwazer and his team was turned down by TAS that has decided to ban the athlete from all the competitions for the time span asked by IAAF.

Therefore, no 20 and 50 kilometres in Rio, the Olympic dream was broken by the sentence for Alex’s recidivism, who tested positive for testosterone after a check carried out the first of January in his home in Racines.

The fact splits journalists and athletics fans and provokes quite different reactions from the people that had followed it. Maybe only in few years we will know the truth about that, if Alex Schwazer was victim of a written plan or if he really fell back in doping depth, nevertheless the race walker is, on the files, an athlete that doped after a disqualification for EPO thus, he is recidivistic.

The race walker reaction is summed in two words: “I’m destroyed“. His trainer, Alessandro Donati, gave him the verdict: “I informed Alex, he stayed in silence for twenty minutes not talking“. Donati himself, during the post-sentence press conference that took place on the terrace of the hotel, said: “We already knew how it would end up, the outcome was already written. Alex was very keen to chase his Olympic dream, he begged us to give him this last chance and we did it but we already knew what we were expecting“.

Afterwards, Donati talked about extreme corruption in IAAF, a “Federation that cannot be considered serious” with an ex-President, Lamine Diack, that was arrested for passive corruption and aggravated laundering in doping. Additionally, Schwazer’s trainer carried on speaking of dialogue between deaf people and of an auto-covered system: in fact, according to Donati IAAF blew hot and cold, carrying the situation till a regime of urgency.

To the questions about Schwazer’s future, Donati himself answered: “Alex grew up during these years, he will be able to live without athletics as well. He had already told he would have competed in Rio and then he would have retired, shocked by this facts“; right during these words, Schwazer goes away, towards the sea, looking for a lonely place without cameras and eyes pointed at him.

With this ban Schwazer will lose the title won in Rome in early May at the World Race Walking Team Championships, passing the gold medal to the australian Jared Tallent.

The event that lasted months and months and that made talking and discussing a lot has arrived at its end, with the hope that, since today, newspapers would be more abundant in Athletics facts and less in doping events, tribunals and appeals, that did nothing more than use up the Track&Field and the sport in general.