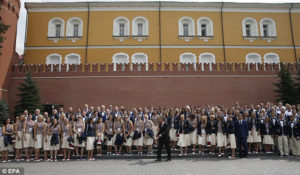 Some days ago, the CIO decided to leave the Federations of the various sports to choose if the Russian athletes can participate in Olympic Games or not, so as they can directly decide which athlete to enroll for Rio.

IAAF had already chosen not to allow Russian athletes to take part in the event, but now the number of these athletes that will not participate in Rio is increasing since they have been stopped by other sports as well.

Although, Russia decided to arrange mini-Olimpic Games in Moscow where the banned athletes will be able to participate. It is named ‘Stars 2016‘ and estimates the participation of 135 athletes including athletes not selected to be part of the Russian Team.

The pole vaulter Yelena Isinbaeva will not take part, as her trainer Borzakovskiy stated: “she decided to take a break after a so difficult season“.

The hurdler Sergey Shubenkov, the high jumper Maria Kuchina and Ivan Ukhov and many other athletes will be protagonists of this event, even though they could have aimed to great results in Rio.