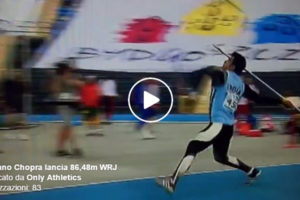 Another World U20 Record has been rewritten in this edition of the World U20 Championships in Bydgoszcz; after Bukowiecki’s World Record in the Shot Put it’s again a throw improving the limits, the javelin.

During the Men’s Final in fact, Neeraj Chopra bettered his PB by metres, bringin it to 86.84m,, stealing the world record from Zigismunds Sirmais (84.69m established in 2011).

Chopra opened the competition with a 79.66m throw, taking the lead in the very next attempt with the record breaking throw.