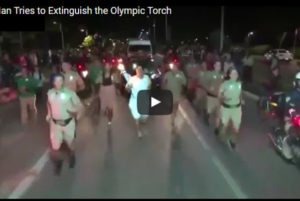 It is on the verge of the unbelievable what happened in Santa Catarina stadium in Joinville, Brasil: during the Olympic Torch parade, on the street towards Rio de Janeiro, a man waiting for the passing of the flame, suddenly attacked the torch with the aim to extinguish it.

To do that, the man used a fire extinguisher, but his attempt didn’t succeed: in few seconds, he has been stopped and kicked out from the Olympic Torch and, afterwards, it has been arrested.

Here it is the video:

Therefore, the torch can carry on its own way towards the XXXI Olimpic Games, whose opening ceremony will take place at Estádio Jornalista Mário Filho (known as Maracanã) the next 5th August.