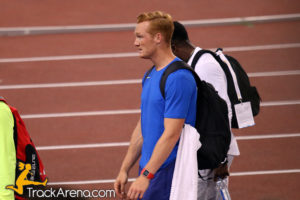 The European Championships in Amsterdam are closer and closer and all the countries are announcing their own teams. The Great Britain was among the first ones presenting its team, with the great absence of Mo Farah, who will save his energy for the Olympic Games.

The hopes of winning are all from the jumps, above all from the champion Greg Rutherford in the long jump, looking for the umpteenth golden medal to insert in his palmares. For the high jump, Robbie Grabarz and Chris Baker will compete against the Italians Tamberi e Fassinotti

As regards the women, Shara Proctor is one of the most favourite in the long jump where she will compete against Ivana Spanovic and the German Sosthene Moguenara who owns the WL.

Another European Champion is Martin Rooney, who fought until the last moment to participate in this Championships: he will do his best to award the title again so as to arrive at the Olympic Games with a good time and to surprise James, VanNikerk and Merrit.

The runners as well present themselves as candidates for the title: for the women, Dina Asher-Smith in 200 and Asha Philip in 100, while, for the men, Richard Kilty and Adam Gemili, who will try to run 100 instead of 200 where he surprised everyone 4 years ago in London; it was a pity for the injury but he will try to get even in Rio for sure. In the 100hs Tiffany Porter is on the blocks with the aim to do her best after a season with many up and down, in order to get closer to the American athletes in occasion of the Olympic meeting.

In 4×100, both male and female, the teams seem to be quite strong, with sprinters that won medals during the single proofs.The 4×400 male team, even though the absence of the favourite Rooney, is one of the favourites, while the female one will present Elidh Doyle, a specialist in 400hs, competing exclusively in the team event.