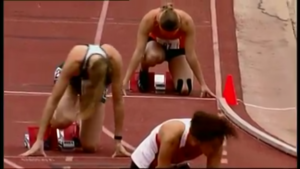 Whoever has run for a scholastic championship or for a race where it was essential to collect points have heard something like that: “What is important is to reach the finishing line, it is not important how, otherwise we will lose significant points”.

Who knows if someone did the same speech to Shelby Erdahl, hurdler of the Idaho State College Athletics team who, in occasion of the Big Sky Conference, the scholastic event that collect 15 different female and male sports, had to run in a 400hs competition.

During the race, the young girl incurred in the total breaking of the left Achilles’s tendon, but she did not leave the track for this reason. She held on and kept slowing running among the hurdlers, reaching the finishing line where she received the warn applause of the public and the support of her rivals so that she could get the medical cares she needed.

Maybe, this is an example of courage that should be followed, an example of how the sport mold the nature of a person: maybe, during an individual race Shelby would have retired, but, in this case, to bring only a single point to his team she kept going till the end, more applauded than the winner.