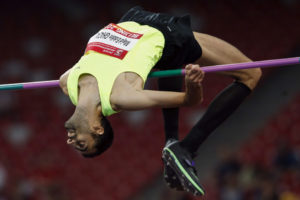 Justin Gatlin continues his strike of victories during meetings winning in 9”94 ahead of the team mate Mike Rodgers in 9″97. For the women, the victory went to Murielle Ahouré, the favourite, in 11″06, and the second place to Ivet Lalova in 11″11.

On 200m the best time was the Jamaican Veronica Campbell-Brown0s one in 22″29 followed by the fellow countrywoman  Simone Facey in 22″63.

Kipyegon Bett won the 800m by thousands of seconds in front of Erik Sowinski, with a time of 145”80 for both.

Aries Merritt conquers the 110hs in 13”24 ahead of the local athlete Wenjun Xie in 13”48 whereas the in the Women 100hs the victory goes to the Jamaican Danielle Williams in 12”80.

Nice performance in the Men high jump by the Syrian athlete Majd Ghazal who manages to jump above the bar set at 2.36m, PB and WL: nothing to do for the other athletes who remained stuck at 2.25m.

For the women, the Bulgarian Mirela Demireva wins with 1.93m ahead of  Svetlana Radzivil and Nadyia Dusanova, bot hof them at 1.90m.

Nothing to do for Shawn Barber in the polevault who was to settle with the 6th place (5.60m) in the competition won by the American Sam Kendrics with 5.92m (PB), an athlete who is critically getting closer to the heights jumped by the trio Lavillenie-Barber-Holzdeppe; second place for Piotr Lisek with 5.70m.

In the long jump, the podium was completely Chinese with Xinglong Gao, Changzhou Huang and Gongchen Tang jumping respectively 8.23m, 8.12m and 8.03m. Also in the triple jump the two best jumps are from Chinese: 17.24m for Bin Dong and 16.98m for Shuo Cao.

In the throws, Yuliya Leantsiuk wins the shot put competition with 18.76 followed by  Anita Marton with 18.60m; the hammer is easily won by the Chinese Wenxiu Zhang with 75.58m, 3 meters more than the second classified Zalina Marghieva (72.39m). Kathryn Mitchell wins the javelin with 64.37m.