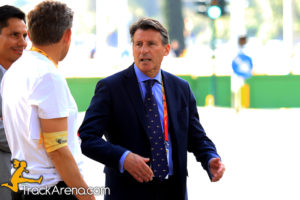 ”I really care very little for the rights of those athletes who have violated the sport“, so the IAAF president, Lord Sebastian Coe, states during a Telegraph Business of Sport conference. During his speech Coe affirmed to be available to recheck the lifeban for the athletes who make use of doping, stating at the same time that the single federations have to play their part as well.

The World Federation president asked to the federations, which have the duty to summon the athletes at the international meeting, not to insert the ex doped athletes in their team or to wait more time after the end of the ban before allowing them to wear the National team banner again.

The British Federation created, at the beginning of this year, a contract in which it states that athletes suspended for doping will not be able to wear the National colours anymore but, as the UKA spokesman Ed Warner states, it will be very hard to make this rule a law. “We need, as a sport, to find ways to keep the cheats out for as long as possible”.

Another point touched by Coe regards the athletes who decide to compete for other nations, which they do not often have any link to, as the middle distance runner Julia Bleasdale who, after having competed for Great Britain at London 2012, decided to pass to Germany.

”My instinct is that we need to settle upon a principle that if an athlete starts their international ­career competing for a particular country, they finish their career for a particular country“, this because very often athletes decide to jump from a country to the other one because they get offered better services or facilities, even if this country has nothing to do with the athlete who, de facto, competes for the best acquirer.