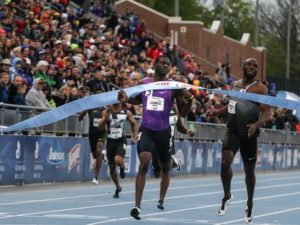 After seeing each other at security distance and being drawn in different races,  Kirani James e LaShawn Merritt finally clashed against each other on the death lap at the Drake Relays di  Des Moines, Iowa. The competition was also renamed ”Rio Olympic Games Preview” to give the right emphasis to a race always enlightened by great performances.

Not only James and Merritt: all the names in the heat belonged to athletes you could expect to see in World or Olympic finals.

Soon after the start, the fight was immediately focused on the Grenadinian James and the American Merritt, who set up from the beginning the right pace to take the lead of the race.

In the last part the head-to-head became even more competitive, with James keeping that small advantage which made Merritt’s come back vane.

Final time for the two: 44”08 James (WL), 44”22 Merritt ; the challenge has just begun and it will for sure renew itself, waiting for Van Niekerk too.