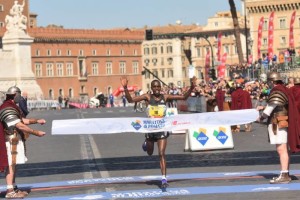 During a typical spring day, the 22nd edition of Rome Marathon took place this sunday with more than 16 thousand runners around the Capital streets. For the occasion, the roadblock was put up and all the streets were completely open.

Victory for the Kenyan Amos Kipruto with a great time of 2h08’12”. The 23 years old runner, thanks to a successful sprint, succeeded in leaving on his back the Ethiopian Adane Birhanu (2h09’27”) and the fellow countryman Dominic Ruto (2h09’28”) who reached the finishing line with the Ethiopian Megersa Tujuba.

Since the first kilometers, the rhythm has been imposed by the a group of African runners composed of Nicodemus Kimutai, Dominic Ruto and Julius Rotich. Close to the Duca D’Aosta bridge, almost at the middle of the race, the fight for the podium started: the young Kipruto will manage, shooting ahead all the rivals and reaching the Imperial Forum as the winner.

As regard the female race, Ethiopian domination with Rahma Tusa and Kedir Kenensa, first and second position with 2h28’49” and 2h28’56” respectively. Third place for the Algerian Kenza Dahmani (2h33’53”) ahead to the forest range athlete Giovanna Epis, the first among the Italian women with 2h39’20”.

The start of the Marathon has been preceded by the handbiker off. Amazing performance for Alex Zanardi who won for the fifth year in a row setting the new route record with a time of 1h09’15”.

Photo from the organizers