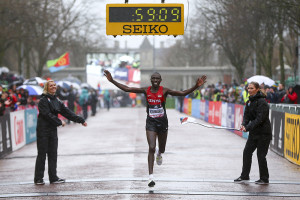 In a cloudy day with a huge rain and wind gusts in the ending part of the race, the 2016 half marathon World Champions were celebrated in Cardiff: Peris Chepchirchir and Geoffrey Kamworor respectively with a time of 1h07’30” and 59’10”.

The first ones to start were the women: the leading team was composed by Kenya, Ethiopia and Japan for the first 5km with a split time of 16’31”. Fast pace from the very beginning imposed by the five Kenyans who did not allow the Japanese to stay in the wake.

Since here, the historical Kenya-Ethiopia started with Peris Chepchirchir, Cynthia Limo and Mary Ngugi to fasten up to put the opponents, Netsanet Gudeta and Genet Yalew into troubles. After passing the 15th kilometer in 48’41” the Ethiopians try an unuseful progression which does not prevent Kenya from doing a triple by completely dominating the World podium with Peris Chepchirchir, followed by Cynthia Limo (1h07’34”) and Mary Ngugi (1h07’54”).

The much awaited men race followed soon after, starring the pluri-medalled Mo Farah and the Kenyan Geoffrey Kamworor. Few seconds after the shot the athlete from the highlands stumbles and falls: he will manage to come back into the leading group after few minutes. From the start, the African tactic is to impose a probihitive pace to tire the Somalian-English Mo Farah and to prevent a fast sprint of his. After the initial separation created by the Ethiopian Abayeneh Ayele, the group becomes more compact with the Kenyans Bedan Muchiri,  Simon Cheprot e Kamworor taking the lead.

At the 10km split, in 27’59” the Kenyan trio is followed by Tamirat Tola (ETH) and Mo Farah. From this point Muchiri and Kaworor fasten up and start their fight for the podium passing the 15th kilometer in 41’41”. Behind them the fight for the third place becomes very exciting: Farah starts sprinting and reaches Tola and Ayele. In the meanwhile a proper storm falls upon Cardiff creating huge problems to the athletes on the track. On the final straight road Kamworor will be the one to win by leaving behind him the fellow countryman and becoming World Champion for the third time. Silver medal for  Bedan Muchiri (59’36”) and bronze for Farah who manages to defeat Ayele in the final part, ending with a very 59’59”.

In the team ranking, Kenya thus grabs the first place, followed by Ethiopia. Fourth spot for the hosting country, for which Farah’s bronze medal was not enough to overcome Eritrea which completes the all-African podium.

In the photo: Geoffrey Kamworor (Jordan Mansfield/Getty Images for IAAF)