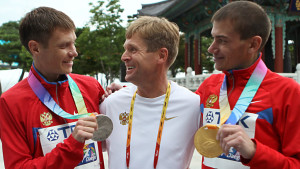 The news that all the clean sport fans were waiting for finally arrived: the Russian racewalking team coach Viktor Chegin was lifelong disqualified.

Chegin had become a maestro in Russia, his athletes won continously and they seemed to be the strongest in the world but also the ones who were tested positive to anti doping tests more often: one year ago the latest three athletes trained by the Russian trainer were disqualified and this summer the Russian Federation decided to ban Chegin.

After the recent developments involving ARAD (the Russian Federation), RUSADA (the Russian Antidoping Agency) decided to go further and to life ban the coach who in the past few years filled his athletes with doping substances.

Since now Chegin will not be able to take part in any activity regarding working with an athlete or activities organized by the federation.