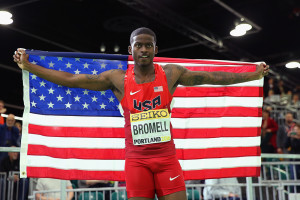 In the second part of the morning in the Portland Indoor World Championships the qualifiying rounds for 3.000m, 1.500m, 800m and 60m were ran; the latter were particularly interesting with an unexpected finale.

In the qualifications Asafa Powell astonishes everyone and runs 6”44, best time of the heats and WL; he confirms the same time in the semi-finals as well, highlighting his will to win the first individual world title.

During the finals everybody expected Powell’s victory without taking into account Trayvon Bromell, athlete class 1995, bronze medal in the 100m in Beijing. Excellent start for the kid who gets the lead and does not drop the position for a second, 6”47 for him, PB and World golden medal, taken by Asafa Powell’s hands who arrives second with 6”50, whereas the third spot goes to Ramons Gittens in 6”51 (National Indoor Record).

The female long jump crowns Brittney Reese as World Champion for the third time, the first woman to win the title in the specialty for three times. She won the competition on the third jump on which she landed at 7.22m, only one centimeter below the personal record. Ivana Spanovich, who was leading until the last jump, sets her own PB and the Indoor National Record jumping 7.07m; National Record also for the British bronze medal Lorraine Ugen, 6.93 for her.

The title in the Men shot put was assigned to the New Zealand athlete Tomas Walsh who wins without too much effort with a last throw of 21.78m. One meter behind Andrei Gag grabs the Silver, SB established with 20.89m and third place for Filip Mihaljevic who sets his PB in 20.87. Konrad Bukowiecki joined the competition as well, arriving 4th and throwing the put at 20.53m.

In the afternoon the 400m semi-finals were ran as well; among the men the favourite one, Bralon Taplin qualifies for the final in 45”38, ahead of the World Champion Pavel Maslak with 45”71, same time as Abdelelah Haroun. Among women,  Stephenie Ann McPherson loses a position being now in the third position with 51”91, her PB. Oluwakemi Adekoya establishes the Continental Indoor Record with 51”47 and stays on the top of the ranking, whereas Quanera Hayes rises to the second sport in  51″54.

Nia Ali is the new World Champion of 60hs only a scratch away from the USA colleague Brian Rollins,  7″81 versus 7″82. Third place for the British Tiffany Porter in 7″90.

Pentathlon concluded with the victory of  Brianne Theisen-Eaton, first world title for him with 4.881 punti who are worth the PB. Second spot for Anastasiya Mokhnyuk with 4.847 points, PB for her too, and third place for Alina Fodorova with 4.770 punti, PB for the Bronze medal as well.