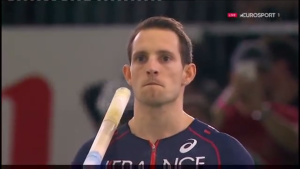 Yesterday in Portland the first of the events leading to the award of one of the most desired Indoor World has started: the pole vault.

The sport hall is full and on the two springboards women and men started the fight; Le Roi Lavillenie patiently waited for his entry measure, 5.75m, looking at the opponents’ jump, among who Shawn Barber who overpassed 5.55m with agility and without effort.

The Canadian, Outdoor World champion in charge, struggles to overcome the measures following the entry one and he goes past 5.65m and 5.75m on the last attempt; after two errors at 5.80m he tries to go past 5.85 but the bar falls earning him the 4th place.

The third place goes to the Polish Piotr Lisek with 5.75m who leaves the competition when on the field Lavillenie and Sam Kendricks keep fighting. Nothing to do for the American who leaves the title to the world record holder finishing at 5.80m after having attempted 5.85m and 5.90m.

Lavillenie jumps 5.75m e 5.90m easily leaving hope for a great performance; on the following measure, 6.02m, the bar trembles a bit but it keeps standing allowing the Frenchman to sign the new Championship record.

The bar rises to 6.17m, one centimeter above his World Record.

The first attempt is null, on the second he falls above the bar finishing in the box which is front of the pallet, on the third he passes below the bar.

The World Record will have to wait once more to fall, in the meanwhile Lavillenie adds one more medal to his palmares.

Among the women the first new record to be established is from the class 1996 girl from New Zealand, Elisa McCartney, who rises the national indoor record to 4.70m. The Swiss Nicole Buchler managed to jump 4.80m after some hesitations at the previous measures, setting the new national record as well.

The favorite was the home athlete Jennifer Suhr, recently conqueror of the Indoor World Record, who does not disappoint expectationsand with a progession jumps 4.60m, 4.75m, 4.85m e 4.90m and wins the title, getting the first medal for United States. After asking for 5.04m to try to attack the world record already in her possession she decides to close the competition because of some pain in the ankle. The measure is worth for the Championships record and allows her to win her first indoor World Title ever.

The second spot is for an American as well Sandi Morris, who follows the wake of the team mate with just one error at 4.75m and closes the competition at 4.85m after having attempted 4.90m and 4.95m. Bronze medal for the Greek  Ekaterini Stefanidi, perfect progression until 4.80m but she cannot overcome the following measures. With Buchler’s fourth place at 4.80m it is the first time in the history of the Indoor World Championships that four athletes manage to reach that measure, index of the incredible level of the specialty in this period.