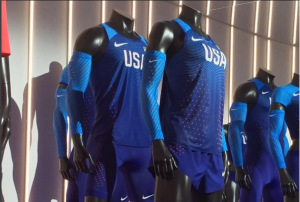 In addition to the opening of the World Indoor Championships in Portland, on the 17th of March the Nike Innovation Summit took place, organised by the prestigious sport clothing brand (from Portland) in New York.

During the evening, the eyes were pointed at the new outfits that the USA, and the other countries sponsored by Nike, will use for the Olympic Games.

After five years, the USA team will have a blue outfit again, but not the dark blue used in 2011, but rather a vivid softened sky-blue, really elegant.

Queen of the evening was the champion Allyson Felix, who, beside doing the fashion model for the race outfit, presented the new spiked shoes Nike Zoom Superfly Flyknit, an innovative shoe for hyper performances. Thanks to its new design which envelopes the ankle, they ensure a major adherence.

"Give a girl the right shoes and she can conquer the world."

In addition to the spikes, Nike showed particular legwarmers for calfs, equipped with ”aero blades” : little rubber blades to make the athlete leg more aerodynamic while moving since the air is passing faster close to the frame.

Obviously, this record kit is reserved for the wannabe Olympic champions; who will manage to win this amazing suits to compete on Rio tracks?