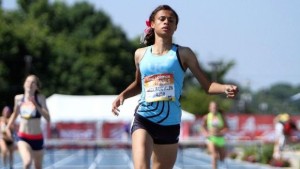 Nothing compares to NCCA and the School Championships, this young American athlete speed along towards World and Olympic finals.

Sydney McLaughlin is a young hope of the “star and stripes” Track&Field; she came out with the Under 16 World record on 400hs, run in 55″28 followed by the Youth World title in 2015 in Cali.

Sunday in New York, the young star from Union Catholic wrote her name on the top of the all-time lists of her category one more time, this time in the Under 18.

At the starting blocks of plane 400m indoor, McLaughlin has soon showed her potentialities, starting as front-runner and keeping the position until the end, fighting only against the clock.

McLaughlin’s time is also the new National High School Indoor record, held since 2006 by Francena McCorory with her 51″93.

Will this young speedy athlete take part in Portland as well? We actually do not know, for now let’s take cognizance of these two amazing results achieved with a single run, fortunately shot and posted on Youtube.

Enjoy the video of the possibly future Olympic champion.