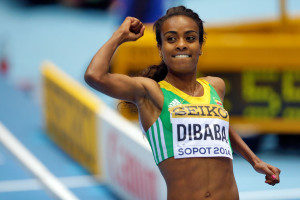 This year Globen Galan in Stockholm has been unforgettable! 4 World Records have been set on the indoor track of the Sweden capital.

The evening of records starts with Ayanleh Souleiman, athlete of great agonistic strenght, with his 1’43″63 on 800m succeeded in breaking the record which belongs to Wilson Kipketer: 1000m indoor.

Another record (the second one), on 500m, this time, was set by Abdalelah Haroun, who was able to run in an extraordinary time of 59”83! Literaly terrific! The tweet shared by the Gala organisers is not properly correct, in fact, the outdoor record, as it is known, is 59”32 and it was estabilished by Orestes Rodriguez (Cuba) in 2013.

Abdalelah Haroun is the first person ever to run 500m in under a minute. 59.83 is the unofficial time. #globengalan #athletics

The third jewel comes from the middle-distance Queen of the last years: Genzebe Dibaba.

After her world record on 3000 and 5000, the Etiopian Queen achieved also the Indoor Mile record, running 4’13”31, four seconds below the previous one belonged to Doina Melinte, who run 4’17”14 in 1990. An unforgettable evening for all assisting the Sweden Meeting.

In the other races, great performance for the Greek pole valuter Nikoléta Kiriakopoúlou, who outdid the Brazilian Fabiana Murer jumping 4,81. With 4,49m the fourth record of the evening was set: Lisa Gunnarsson broke the youth world record!

Always on the field, the Canadian shot-putter Tim Nedow made an amazing performance: with his shot managed to reach 21,33, PB and MR: two birds with one stone!