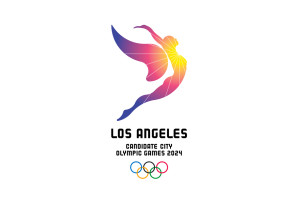 ”The quintessence of the logo for an Olympic offer in the city of angels.” These are the words used by the official Facebook of USAFT in presenting the Los Angeles location which will compete against Paris and Rome for the organisation of the Olympic Games 2024.

The logo presents an angel with the sunset colours, with spread wings and a shining sun which departs from his hearth, to highlight the slogan of the campaign: “Follow the Sun”.

The president of the candidature committee Casey Wasserman stated that: “We are inviting the world to follow the California sun in 2024.”

But this is only the logo of the candidature, in fact if LA 2024 succeeded in its attempt, the following organizing committee would create another symbol for the games themselves.

We can only but wait.

Here is the video of the presentation of the Logo posted on Twitter by USATF.