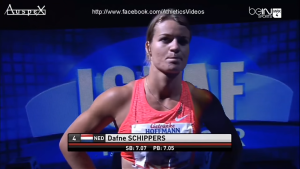 The ISTAF Indoor Meeting, the annual meeting held last sunday in Berlin is  gathering a large number of athletes from all over the world each edition.

After Ewa Swoboda set the World Record and rised on the top of the WL, Dafne Schippers did not wait so long to reply her great performance and she came back on the top of the seasonal world ranking runnning 7″04 in the heat. Not glad, she bettered in the final setting the time of 7″, the second PB of the evening and the Meeting Record.


In the women long jump, the German Alexandra Wester set as well the best seasonal performance jumping 6.95m, followed by Shara Proctor who estabilished her PB with 6.86m.

Renaud Lavillenie was not able to win the competition and he stopped at 5.85m overleapt at the first attempt after he risked to drop out at the entrance height of 5.69m. Instead, the Brazilian Thiago Braz Da Silva won with 5.93m, not succeeding in jump 6.01m for three times; 5.93m is his PB as well as the Continental Record. Raphael Holzdeppe reached the third position with 5.77m.

In the 60hs, Dimitri Bascou, the French athlete, ran 7″41 setting the National Record, the Meeting Record and the best seasonal world performance, whereas, among the women, the German Cindy Roleder won with 7″96, estabilishing her personal seasonal record.