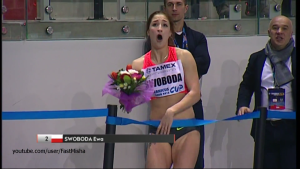 Two weeks ago Ewa Swoboda was bettering her U20 European Record on 60m. Tonight the Polish athlete reached the higher level and she broke the World Record of the event.

During the race in Torun, Swoboda ran as a bolt and she set the time 7″07, two cents below the junior limit estabilished by Joan Ekah in 1999.

Such time is not only her new WR but it places her on the top of the seasonal Indoor World ranking for 60m at the same level of an athlete of a great calibre, Dafne Schippers.

Despite the doping scandal that is affecting the Track&Field in the last months, the athletes all over the world are beating all the records so as positives news are spreding again about the “Queen” of the sports.

Here is the video of the record.