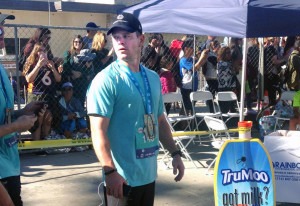 The well-known USA actor Matt Damon and his wife Luciana Barroso completed the Surf City Half Marathon, California, on Sunday, the 7th.

The night before the event, Damon stayed awake untill 2, waiting for the results of the Directors Guild of America Awards because he was not sure he would have run. Moreover, he has been away for two weeks, he did not train enough but he could not say no to his wife who was exiting about that.

Barroso finished the 21km in 2:13:40, while the star ran with a false name. He would have remained anonymous if he had not taken some selfies with other runners at the finish line. Carefully looking at a picture taken by a journalist, Damon seems to have the number 148, 146 or 140.

In the results, the number 148 owns to a woman, thus we can exclude it; the number 146 concluded the race two hours later Barroso, but the actor stated he was waiting for the wife at the finish line, so the final time has to be lower that the Barroso’s one; so, the number 140, which owns to a 45 years old man (Damon’s age), named Matthew Greenleaf with a time of 1h58′, corresponds to the identikit of the star of the cinema.

This time, the secret agent Jason Bourne did not manage to keep his false identity because of a selfie.


Caught up w/ Matt Damon at @lovesurfcity. He ran the half. Took lots of selfies w/fans as he waited for his wife. pic.twitter.com/SlaBGoAdHC