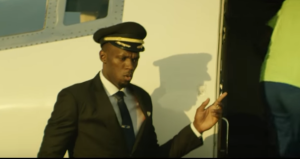 Ironic and funny, Bolt style: the new Puma video made to advertise the new Puma Disc, the laceless shoes, plays on the time and the person exchange.

While he is on the pitch, another young runner runs on the grass, attracting on himself the chilren’s eyes. From the track, the action immediately sfits on a mini-concert, which Asafa Powell and Andre De Grasse are part at too.

The “false Bolt” grabs the microphone and tells two of his runners colleagues to follow him, whereas the “true Bolt” is flabbergasted among the spectators. And so on, day after day, as the movie “Groundhog Day”. The apex is reached when Bolt ends up dressed as the pilot of the jet that is taking the fake Bolt and his crew to a race which the true Bolt will watch from the stands.

The end of a skein will be found when Bolt dress his new Puma Disc.

Apart from the description and the advertising, this video is nice and, actually, it cherfully induce to run thanks to characteristic Usain Bolt’s smile. Enjoy!