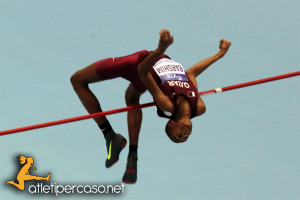 The lath from Qatar, the one who is likely to pick up Javier Sotomayor’s title, Mutaz Essa Barshim, decided he will conserve his strength for the Olympic golden medal, renouncing practically to all the races of Diamond League, where he awarded the first place on 2014 and 2015.

For the jumper, born in 1991, the Diamond League track was maybe the greatest stage to spread his wings beyond the crossbar. Starting from 2013, the events including the high jump have almost always appreciate Barshim’s elegance, who often surpassed 2,40m, with his best in the 5th of September 2014, when he reached 2,43m in Bruxelles, decorating with astonishing comparisons with Bohdan Bondarenko.

2015 started in the best way possible for Barshim: he jumped 2,41m at Banská Bystrica indoor competition in the 4th of Jannuary 2015; but since that time, something slowed down his ascent towards Beijing World Championships, where the Qatari awarded “only” a bronze medal with a 2,20m full of regret.

At the opening of this agonistic 2016, the strong high-jumper declared his body was tired because the two years spent wandering on the tracks all around the world, negativetly influencing the 2015 Beijing performance; therefore, there is just one thing to do: to rest (but not too much).

Mutaz Barshim will go to Portland to defend his World Indoor title won at Sopot in 2014, from there just one or two Diamond League stages to find the perfection and, who knows, maybe a 2,46m on Rio De Janeiro approach.