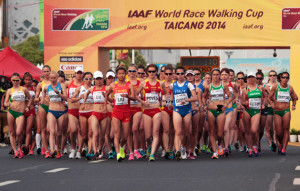 With Russia’s disqualification from all the competitions a new host for Racewalking World Cup, which was supposed to be held in Cheboksary, had to be found.

Four cities offered to host the event: Rome, Kiev,Gayaquil and Monterrey. Today the IAAF Council voted and Rome won with 9 votes against the 4 given to Kiev and Gayaquil and the 2 to Monterrey.

The event will take place on the 7th and 8th of May with a track including Arco di Costantino and Terme di Caracalla; the race will end inside Caracalla’s stadium. Five races will be held: the men 20km and 50 km, the women 20km and the two 10 km junior.

World Junior Championships, since 2016 officially named U20, have been assigned to Bydgoszcz (Poland). The city was the only who presented a candidacy to reallocate the event stripped to Kazan and will see competition from 19th to 24th of July.