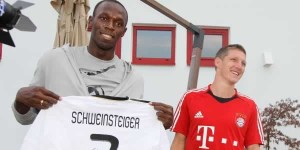 English and German tabloids, in these days, have reported a curious statement, or rather, outburst of one of the most famous football players in the world.

Usain Bolt is nowadays a synonym for “velocity” and this is what, according to the latest and repeated critics, Bastian Schweinsteiger would lack.

Schweinsteiger, ’84 German midfielder playing for Manchester United, World Champion for Germany, has been credited as “very slow” after the last performances, so much that some have jokingly suggested to substitute him with Usain Bolt, great Manchester United fan.

Schweinsteiger has not taken it with philosophy, so that he wanted answer to the press mentioning Usain Bolt himself.

“I might not be able to compete with Usain Bolt but being slow or fast on the pitch is not only related to sprint. It is also about being fast in thinking and taking decisions, and this is something I am totally capable of. And, physically, I am not the slowest in the world!”

This is gossip, of course, but we wonder how much Usain Bolt laughs, everytime that his name is related to comparisons or, as in this case, jokes for other sport people. Such is the price of being the fastest in the world.