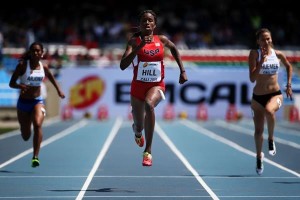 By now, it is well-estabilished: Track&Field is getting younger and younger.

After the contracts signed by the two young sprint stars, Trayvon Brommell and Ande De Grasse, both of them 20 years old and bronze medal at Beijing World Championships on 100m, an even younger athlete come up to join the “enfat prodige” club of Track&Field, Candace Hill.

In fact, Candace, 16 years old coming from a little village near to Altlanta, has announced she has signed a contract with ASICS, moving from school athletics to the professional one and becoming the youngest athlete ever doing the big leap.

Hill, Youth World Champion in 100m and 200m and new record holder of the World Class Record with 10”98, since today will not compete for her school, the Rockdale County High School, and she will start to race against the most relevant sprinter in the world.

Nevertheless, the 10 years contract with ASICS, of which the economical terms are not known, has a particular condition. In fact, the company will pay the athlete to allow her to keep her studies. Besides being the best teenager ever, Candace Hill, in addition, is a bright student, and she assured she will not drop her education.

Both her family and her manager argued that this new status will not change her current condition, she will keep going to school and keep training as she has ever done. The only change will arrive in June with the new trainer, Tony Carpenter, who will work in contact with her school trainers and he will be supported by ASICS.