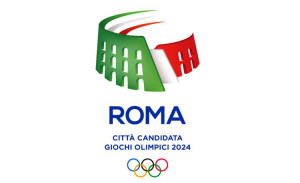 Here it is, the logo chosen to represent Italy, and particularly Rome, for the candidacy to Olympic Games in 2024.

We can clearly recognise the Colosseum painted in green, white and red, as the Italian flag, shading in something looking like tracks of an athletics field.

The logo chosen by Italy as “mouthpiece” of its nomination, has been revealed at the Sport Hall in Apollodoro square, in front of a thick pubblic of over 2500 young people.

Now we have just to wait for the responses by CIO, which will scrutizine the proposal and what the other candidates are offering; they are Budapest, Los Angeles and Paris.

“We can win since we have everything to do it: culture, beauty, technology. Rome wants to grab this extraordinary opportunity”. These are Luca Cordero di Montezemolo’s words. “This city organised Olympic Games in ’60 perfectly and it wants to arrange the best Olympic Games of this century”. .