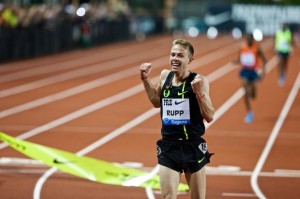 Now that sport activities are starting, it is time for marathons with both small and important competitions almost everywhere.

In the USA the organisation of reviews is part of the daily agenda and the most relevant athletes are not underestimating this at all.

Galen Rupp, one of the captains of coach Salazar as well as the current Olympic silver medal in 10.000m, yesterday showed up at the Foot Traffic Holiday Half Marathon in Portland, Oregon.


Rupp needed a time of 1h05’00” or less to qualify for the next competition of Olympic USA Trials. Mission accomplished: with a time 1h01’20”, Galen Rupp officially qualified for taking part to the harsh American selection for the Olympic Marathon.

If the strong long-distance runner will be part of Filippide’s competition is not sure yet because, if he will decide to undertake the career of Marathon, likely, he will not take place to the outstanding Indoor World Championships (precisely in Portland).

In a shocking result, @G_Rupp won the local holiday half! Official time, 1:01:20 pic.twitter.com/M3sIjrufeI