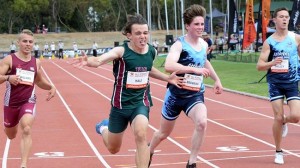 Jack Hale’s name rose to fame exactly one year ago, when he managed to run the 100m in 10”13 during the Australian Championships, also thanks to a generous +3,4 m/s wind.

12 months after, during a race in Perth, the Australian youngster managed a fantastic 10”38, this time with normal wind (+1,8).

Hale had already managed to run fast during the beginning of this Australian season (let us remember that it is almost summer there), stopping the chrono below 10”60 multiple times and, once, he ran in 10”76 on the grass.

Jack Hale was not even sure to run this fabolous 100m until 45 minutes before the starting shot.

For the precocious sprinter this is the umpteenth category record, 4 hundredth of seconds lower than the previous one, and also a leap to the seventh spot in the Young World Ranking 2015, even with the Brazilian Silva. This ranking has been lead since the 7th of September by the South African Tlotliso Leotlela, with 10”20.